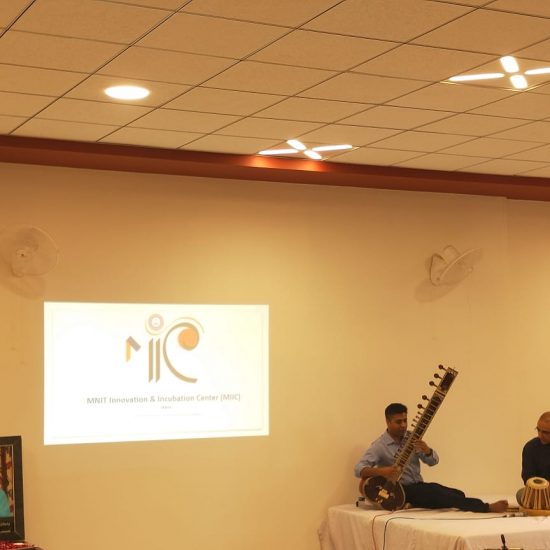 MNIT Innovation And Incubation Centre(MIIC) registered its 51st startup at the centre this week. On this occasion Prof. Jyotirmay Mathur, Head MIIC addressed huge gathering and informed about this a joyous occasion for MIIC to clear half century within two year of starting the TBI at MNIT and after that Dr. Monica Sharma, Coordinator MIIC narrated how a MNIT Innovation And Incubation Centre was started and idea of founder secretary was nurtured and how rapidly MIIC has grown up to reach this level. Mr. Paresh Gupta, Marketing and Business Development mentor at MIIC was glad to witness the sustained and systematic growth of the incubation centre since last two year from scratch to a full-fledged business hub especially in the last 6 months with world class facilities mentors on board. The growth has been steady without any prejudices. Incubatees of MIIC Mr. Shashi Shekar, Founder Digital Bhagat welcomed all the new incubatees and informed that they are happy with the support and facilities provided by MIIC and this is directly reflecting into the growth of their business. Mr. Abhishek Jain, Founder Indibuds said that more like minded individuals at same place shall help to all companies in enhancing the synergy leading to better solutions. MIIC can cater upto 120 startup at a time. The total built up area of the centre is 50,000sq ft. MIIC have empaneled five mentors in different areas like accounting mentoring, company compliance mentoring, digital marketing advisory, product development and marketing and business development mentoring to support its registered incubatees. MIIC provides 3D printers, Laser Cutters, Vertical CNC Machines, SPSS, XYLINK, CATIA software to its incubatees. Besides these facilities various recreational facilities such as table tennis, badminton, carom along with basic pantry facilities for tea/coffee and snacks are also available at MIIC. Currently incubatees of MIIC are working in different areas like IOT, energy, prosthetics, composites, digital marketing, agro-tech, medical devices, 3D printing and modeling, service aggregator, intelligent infrastructure and automation, ecofriendly textiles etc. MIIC already has strategic tie-ups with major industrial association such as CII, FICCI and professional societies such as IEEE, ISHARE etc. It is expanding its collaboration with funding networks to provide financial support to its start up.